Screen shots, also known as screen grabs or screen captures, are extremely useful for letting other people see exactly what you see on your monitor. It’s a powerful tool to diagnose browser or computer specific errors. Combined with annotations, screen shots are a great tool for tutorials and documentation. In this guide, we’ll show you our recommended screen shot techniques for both the Windows and Mac operating systems, and well as browser tools. The tools we talk about are entirely free. More importantly, all of these will get you better results than whipping out your camera and taking a picture of your monitor.

The Mac operating system has some handy keyboard shortcuts built in.

Saving screen shots to a file

Saving screen shots to the clipboard

These commands do the same as above, but copy the image to your clipboard. This is useful when you paste to paste the image directly into another program, like an image editor or in an email.

These shortcuts will take a screenshot and save it to your clipboard, so you’ll have to paste it into an image editor like Paint and save the file as a JPG or PNG file.

If you’re still on Windows XP, I’d recommend installing either Firefox or Chrome. The available screenshot extensions make the process a lot easier. Otherwise, see the Standalone Apps section for free software you can install.

The latest versions of Windows, starting with Windows Vista, comes with a handy utility called Snipping Tool. You can find it the Start Menu: 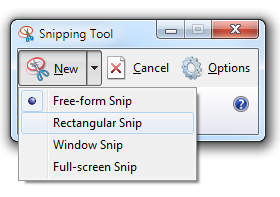 It gives you 4 screen shot options and lets you mark up the capture before saving it directly to a file or copying it to the clipboard.

Modern web browsers support extensions or plug-ins that allow you a lot more flexibility with your screen shots, such as take an image of an entire web page and add highlights, notes, and drawings, and share the images online. These are my favorite free choices for each of the most popular browsers.

If at all possible, I highly recommend using either Firefox or Chrome as your primary browser. Their speed, stability, and standards compliant page rendering will provide a much safer and more enjoyable Internet browsing experience.

These programs are standalone programs that work on both Windows, Mac, and even Linux. They require Adobe Air to run. While these are fantastic apps and take great screenshots, I’d recommend using either operating system shortcuts or browser extensions before considering these, simply to avoid having one more program to install and because the features are identical to the browser extensions available.

Apple’s iOS devices have a built in screen shot function. Simply press and hold the “lock” button, then press the “home” button. You’ll see the screen flash and the image will be saved to your Camera Roll in the Photos app. You can then email it from your device or sync it to your computer.

1 reply on “The Screen Shot Guide”

Wow, marvelous weblog layout! How long have you been running a blog for? you make running a blog glance easy. The full glance of your web site is great, let alone the content!

This site uses Akismet to reduce spam. Learn how your comment data is processed.